Lewis Baxter talks to Patrick Ward about masculinity, technology and unpacking the past.

Your videos appear to made predominantly from found footage, is it from Youtube?

I use archive.org mostly, it’s a website of copyright free video, lots of documentary footage, old movies and archival footage but I’m more interested in amateur footage. To find this stuff I input keywords that bring up videos that have been made by the uploader. I’ll be looking for words that will somehow get me into somebody's personal interaction with consumer technology.

So you're looking for videos that clearly show the handling of the technology used to document rather than videos in which the technology is almost transparent?

Like a certain level of fluency with form that is presented as natural which erases aspects of the everyday reality of its production?

Yeah, and with amateur footage you sort of get a window into the technology behaving in a different way because you get somebody lifting the phone up to capture the video or sort of wobbling around creating footage that’s less stable than something which is commercially produced. And you get all these sort of weird angles and things which I find very interesting.

Do these moments, these “weird angles” inform your editing process? I mean does a certain movement of a handheld camera become a point for you an access point to the footage, a point that informs your editing decisions?

Exactly. Something I like about working with found footage is that you're generally having to work with what you can from the pieces of footage, so you're trying to make something stretch or you have to make a cut because the footage ends or something comes in which kind of disrupts or adds too much, too much context or too much direct representation. Those things tend to get in the way of a more ambiguous flow of things. So a lot of times I see little faults in the footage or shakes and utilise them as dramatic moments.

Part of the studio theme this year has addressed ideas of how technology has a tendency to conceal its inner workings so they become inaccessible, not just physically but also intellectually. It's interesting to see that you're looking at those moments where technology is revealing itself through its limitations, and these limitations appear to be points of departure in your process.

When I was painting in my second year I was looking for photos to print like Rauschenberg style onto the canvases but not sure what I was doing and you said to me to think about the backgrounds of images. You used Youtube unboxing videos as an example of something that we see when we engage with video but don't really process as significant, so, something which is presented, but yet doesn't really hold any significance. This stuck with me and I think it relates to the way that we habitually engage with technology, so we have in our phones a bunch of videos that capture all of these sort of useless moments, useless in terms of currency or meaning.

Hankering seems to be articulating something about gender, masculinity and technology. There are images of generic, stereotypical male activities such as hunting and riding motorbikes and then there are more specific images in Up the Trough such as men scaling buildings in superhero costumes who I assume are part of Fathers for Justice group? Also angry scenes which look like UKIP protesters, maybe?

Oh that's all Fathers for Justice. I suppose it’s things that I wanted to understand and unpack, things of the past, hence the title, Hankering.

The footage of men running around with ladders is both funny and kind of sad. Music and sound is clearly a very important part of your work, it often presents another space, or layer but one that seems off-frame and quite ambiguous. At this point in Up the Trough though there is a moment of song which is very important to the scene’s emotional impact.

The song is from a website called freesound.org, which is basically a huge resource of sounds and songs under a creative commons licence. This song is performed by a person on there who goes by the username ‘googlekatclaire’, she performs conventional vocal songs combined with experimental, electronic elements and vocal effects. The voice sounds to be of someone of a similar age to the men in Up the Trough.

So the elements of electronic effects and manipulation in this song are somewhat similar to what you were saying before about amateur video making and this very legible relation to technology?

Yeah, the lack of production values disturbs the expectations around continuity.

There seems to be a relation between a performative masculinity and the use of technology even if this is something simple like in this case, a ladder to scale a wall, all very phallic displays of power and of course dressing up as childhood superheroes. There’s something going on here that links media, technology, fantasy, and masculinity especially as you use low fidelity or depleted footage, almost on the verge of disappearing. You seem to be interested in a link between the kind of ageing material body of video and the ageing material body of middle-aged men.

I think because that particular sequence starts off with a lot of energy produced through editing. These men engage in something which they believe in but by the end it sort of falls apart, and the fact that they were motivated by their, let's say their ‘boy-ness’. As this becomes apparent the music slows down and you're left without the movement of the song and just the frantic behaviour of these men. So yeah there’s something about the technological support of identities and an inevitable obsolescence. There’s a performance of masculinity which I guess I can see more now than when I was younger, the obscurity of it is becoming more evident as it shows up in these new forms. 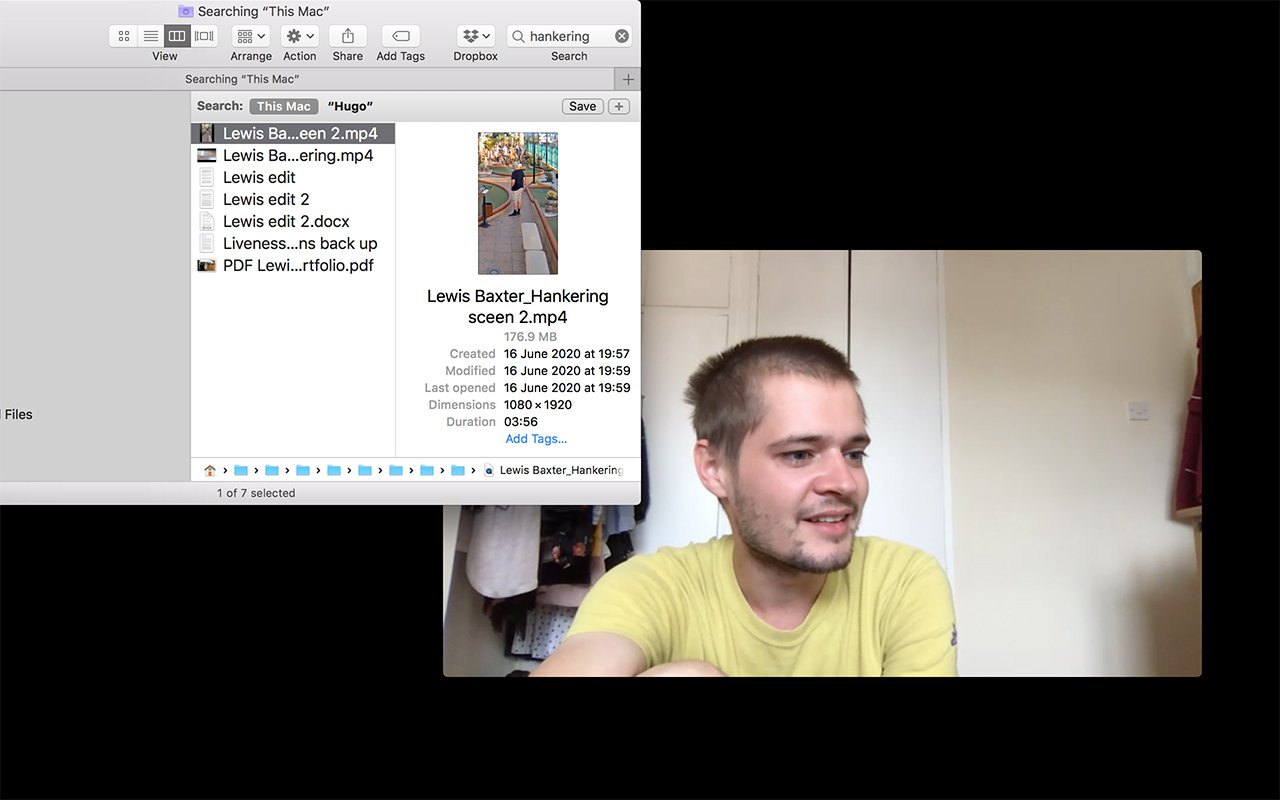 Lewis Baxter speaking from Canterbury. This is an extract for a conversation between Lewis Baxter and Patrick Ward that took place on Zoom on 09/6/20