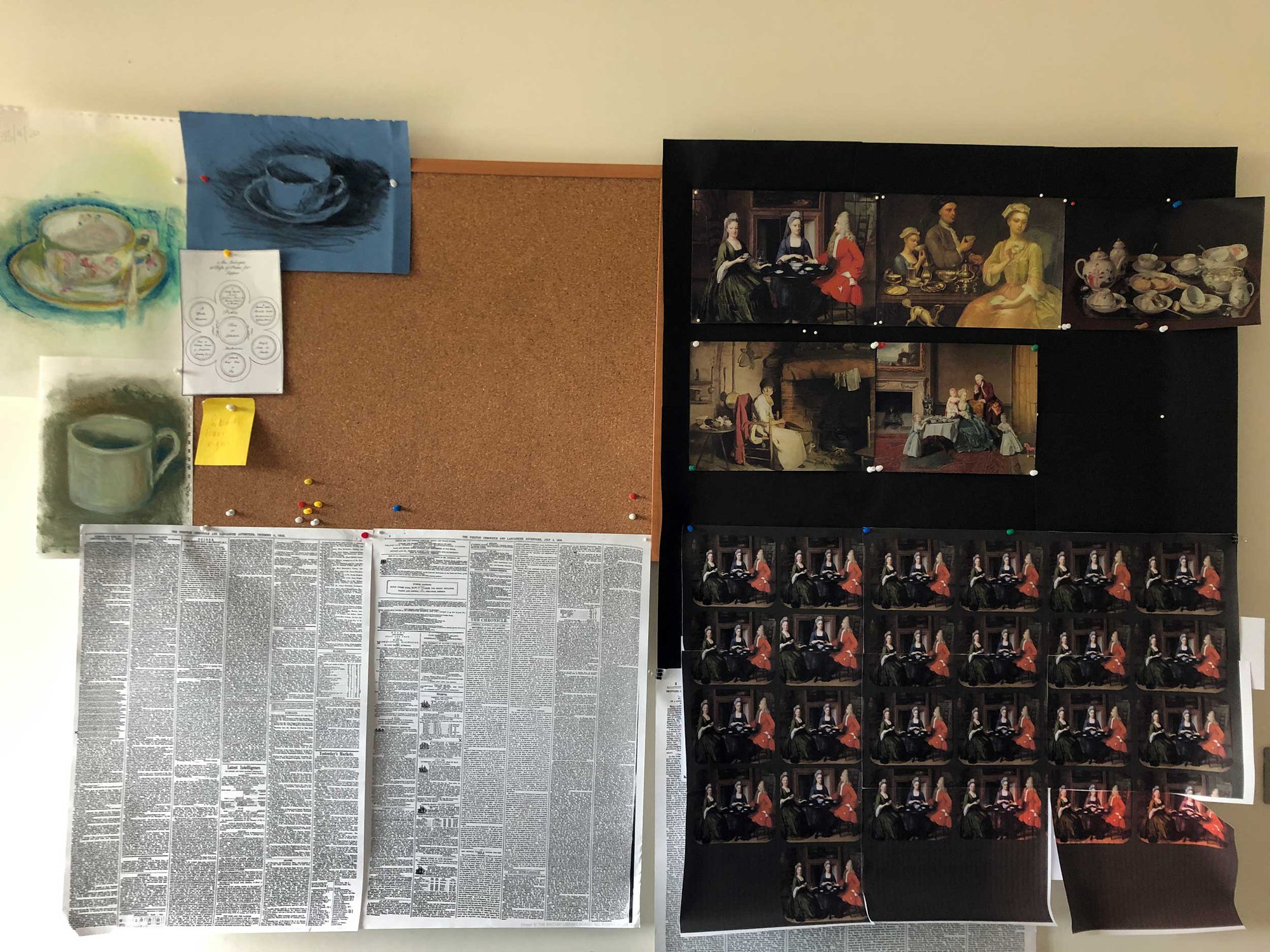 The MA by Project is a research-based masters course. It offers a framework and support structure for students to pursue a project or line of inquiry in an interdisciplinary environment, where theory and practice are intricately related. Here, three students currently in their final year of the course present artists’ statements and work in progress.

I am performing a hauntological enquiry into my own identity, as a British queer mixed-race female with mental and physical health challenges. My aim is to produce an autoethnographic short multimedia fantasy horror. I am also exploring how other marginalised identities inform themselves within western society. I posit that society’s need for patriarchal logic, order and absolute obedience in all areas from schools to government, produce growing pain spectres that perpetually haunt to disempower subjects who do not fit within normative realms. The Othered subject threatens the natural order by appearing to exist, as if supernaturally, out of place and time. Thereby, the subject identified as Other experiences dissociative fugue under the impact of society’s role as witch-finder.

My creative practice is led by my phenomenological experiences of growing up in 70s/80s Harlesden and existing within a racist, abusive white privileged culture for almost five decades. I embarked on an auto-methodological approach which point to themes, signifiers and serendipitous occurrences that occur in my inner and outer worlds. So that I can externalise the internalised and haunt back the society that has haunted me and thwarted my identity as it formed. Re-searching role models for empowering relatedness, I realised I could metaphysically and archaically identify with the power of the witch.

I conceptualised the invisible illness witch comic and white privilege doll video as a satirical and empowering way to make the invisible visible. My third female symbol of empowerment will be unveiled in my film. By creating representational stories that place the disempowered in empowering positions, I hope to invoke the promise of a trauma healed which can be utilised for queerly empowered resistances. 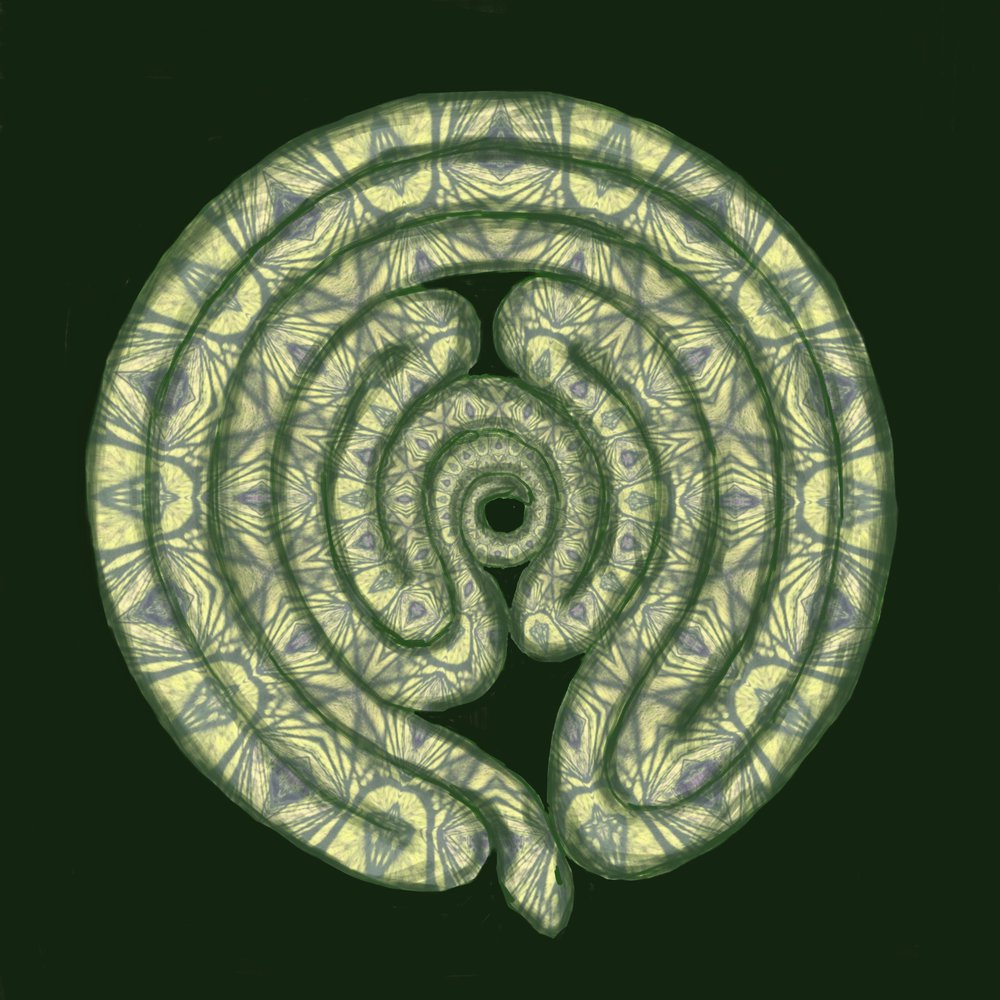 I am in the final year of an MA by Project exploring non-patriarchal and non-hierarchical representations of the divine. I’m currently working with two kinds of ‘icons’. One is reinterpreting icons of ‘the Trinity’, which is a metaphor for ‘Unity in difference’ as the central concept that holds the world together. That would be good, wouldn’t it? But in fact these icons are often the most hierarchical and patriarchal of all Christian imagery (and that’s saying something). My work explores the relationship between three characters, a drag queen, a girl and a giant rabbit.

My other ‘icon’ is the labyrinth, an ancient symbol of movement towards enlightenment, or into the womb of God. I’m working with (fake) fur at the moment, also thinking about stone carving and mowing one into a local playing field. I think the labyrinth is a helpful metaphor for this confusing, disorienting time we’re living in, when usual routines and diversions have stopped and we have been forced to face into ourselves and reflect more – like walking into a labyrinith. The journey out of the labyrinth is meant to symbolise rebirth, or bringing a new perspective out into the world, and I hope that as we emerge from the covid-19 pandemic we will not, as a society, be prepared to go back to the old normal.

As an artist I work mainly in photography, drawing and printmaking. Working on my final project in lockdown means experimenting with found materials and lo-fi methods. I am interested in Surrealism and the idea of the Abject.

Apart from uni, I live and work further out in East London. I exhibit as part of the Present Imperfect collective, I lead inclusive art workshops often based on pattern and natural materials, and on my personal practice of reflecting through drawing. 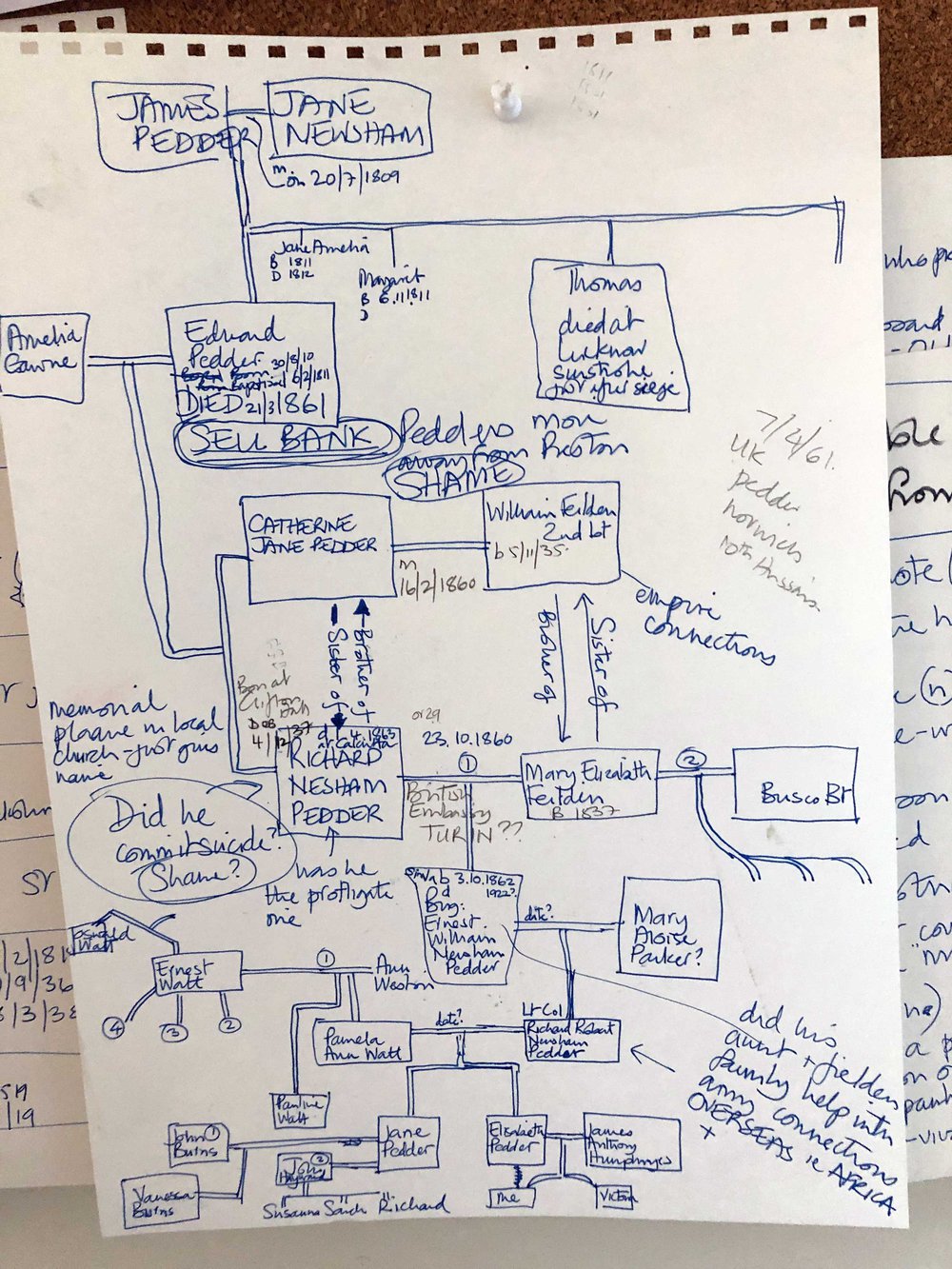 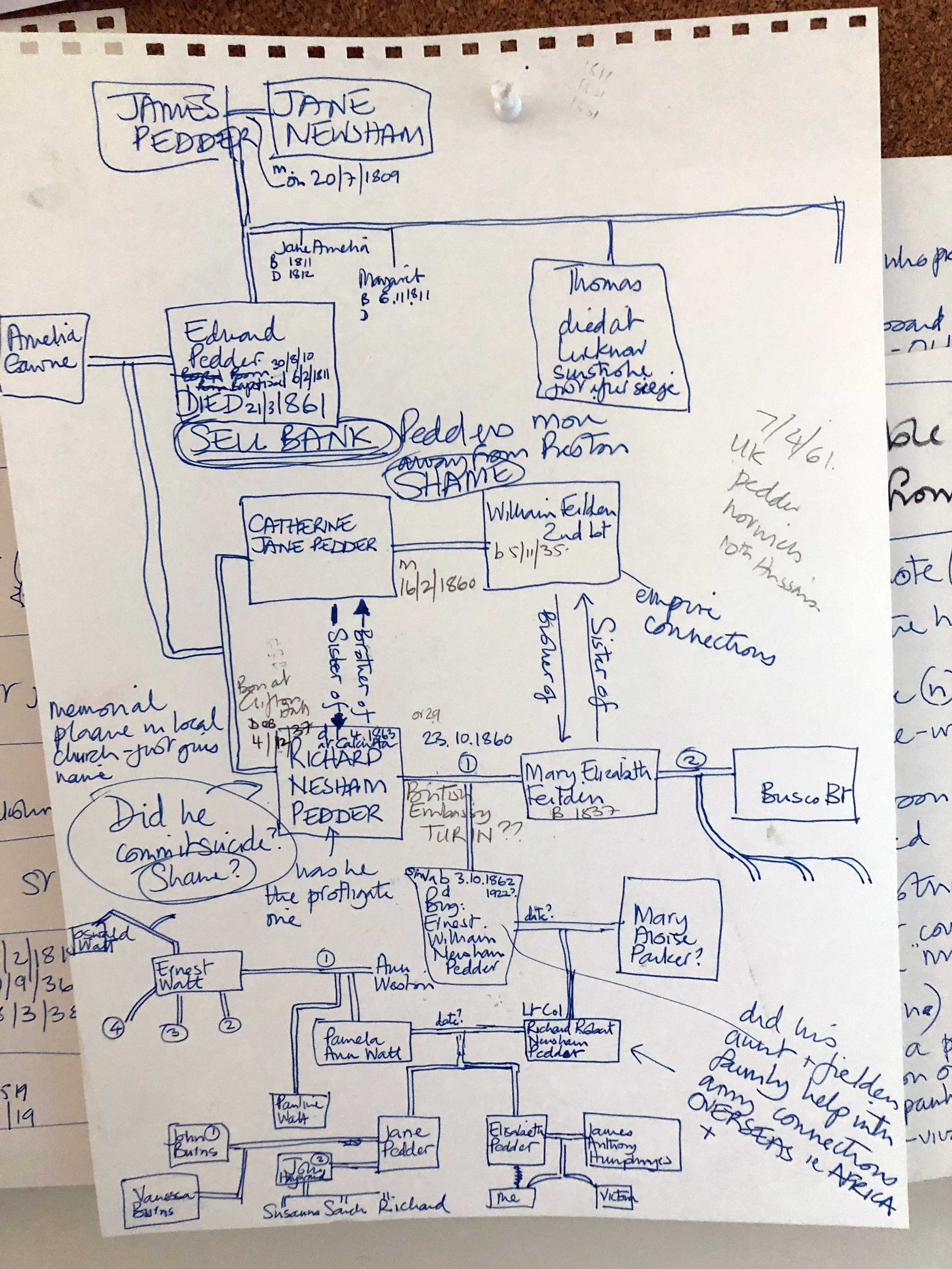 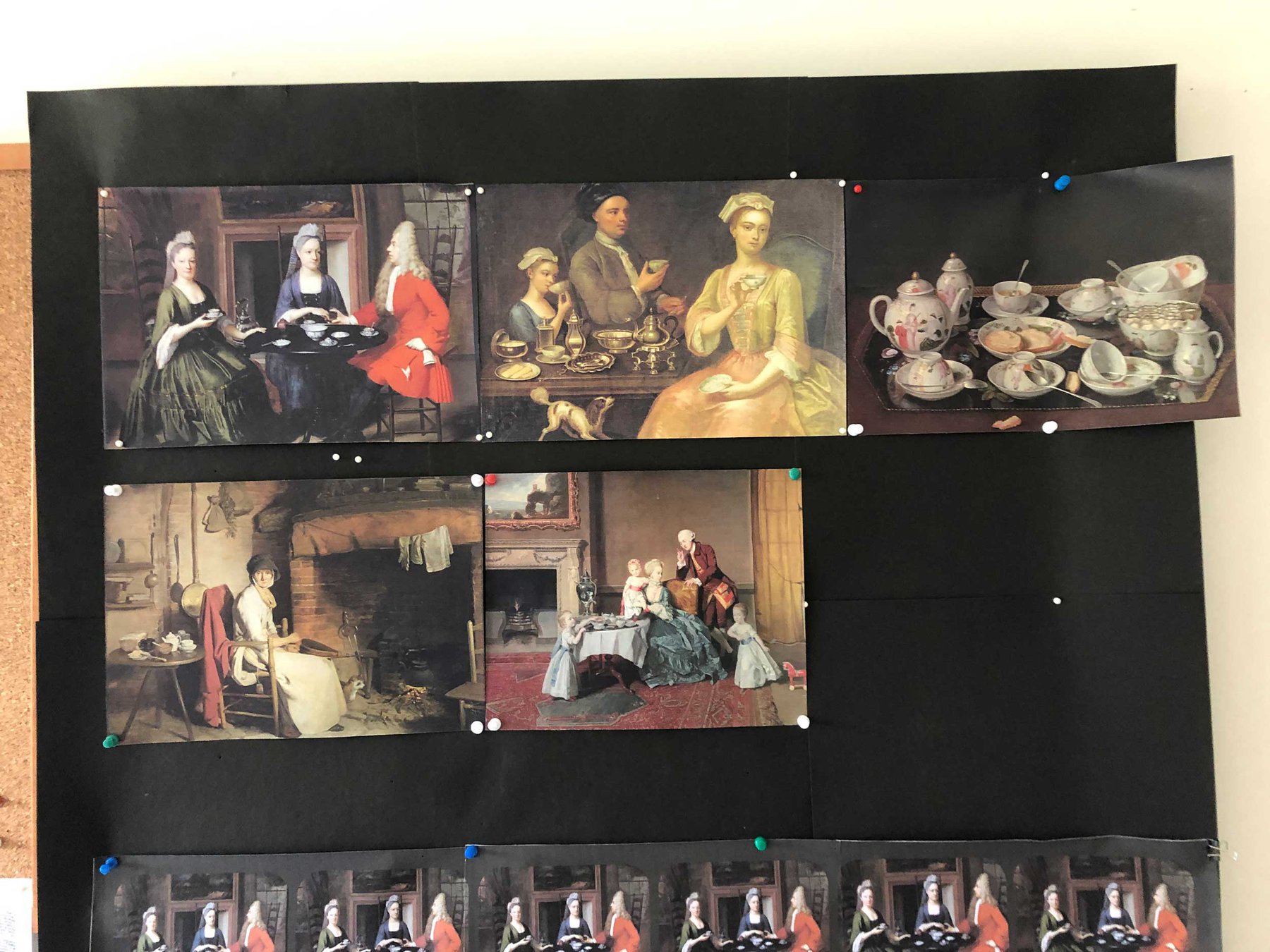 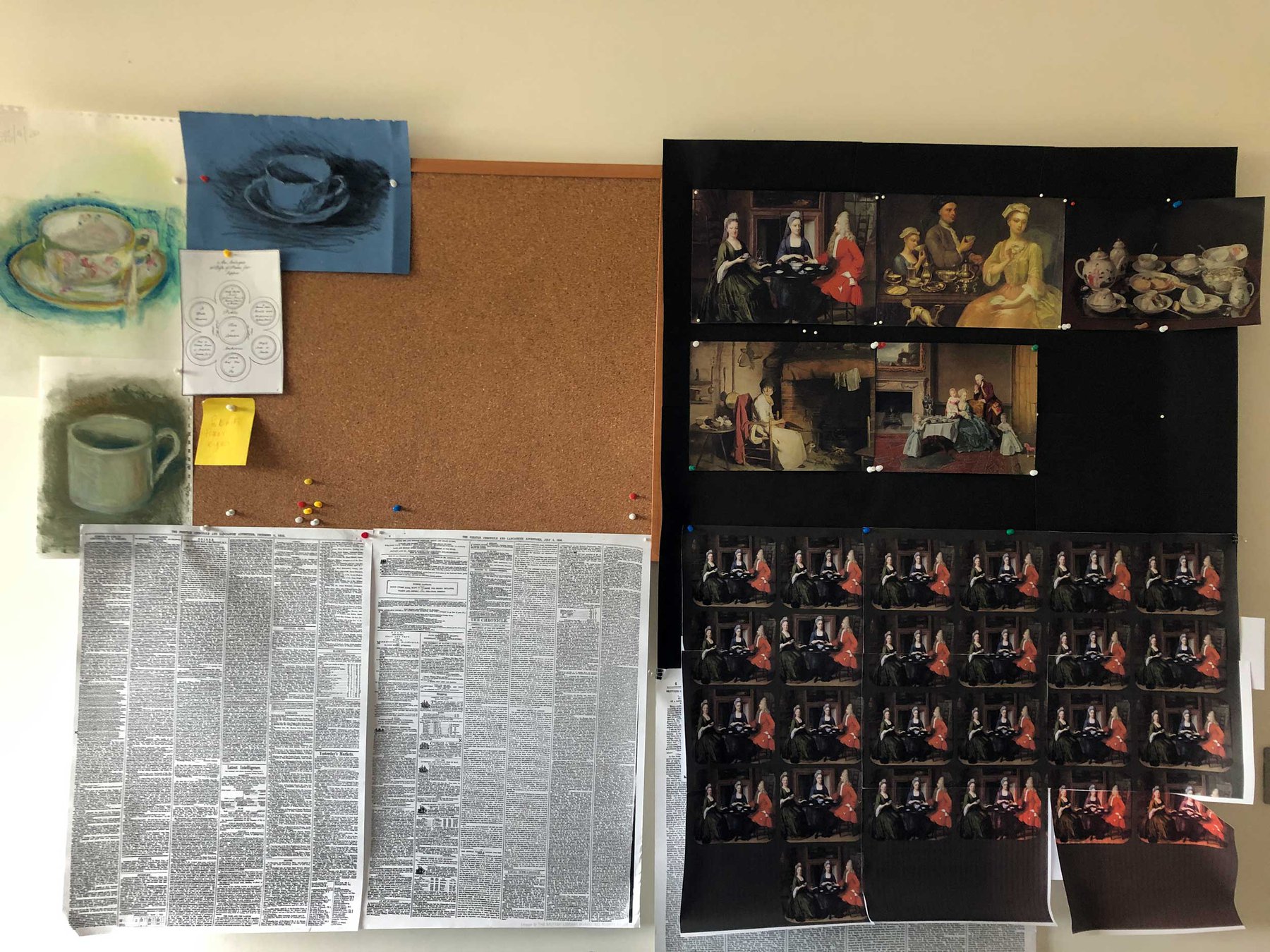 My work is concerned with the exploration of knowledge transfer about the cultural phenomenon known as English afternoon tea and how this relates to my own personal identity.

The present pandemic-induced self-isolation has severed all opportunities of face-to face interaction with a global audience. A reflective space has been created in which to study the fragile threads that bind my immediate family.

Using my tea cups, I started painting and drawing a family group of objects which has, in turn, triggered research about one branch of my family. As I laid out this found information, a narrative of lost identity has been emerging that resonates with my study of English tea culture. There is something about the gradual loss of customs and rituals over time; dissolving and adapting, reshaping and re-emerging as something new.

Many people take great comfort in the gathering of archival information. It means there is a connection between the archive collection and an environment of order. The archive provides a place not only of comfort, but of control. This sense of order, in whatever form it takes, acts as a barrier against the unpredictability and lurking chaos of the outside world, both past and present.

My work is an examination of the different forms this barrier takes, and the thinking that lies behind it. I am using photographs of Museum-curated domestic tea objects, paintings depicting tea drinking, and words from the Oxford English Dictionary as the common denominators of our lived environment. Altering how they are presented is a way of questioning the attitudes, agency and unwritten rules that have formed that environment and our behaviour within it.